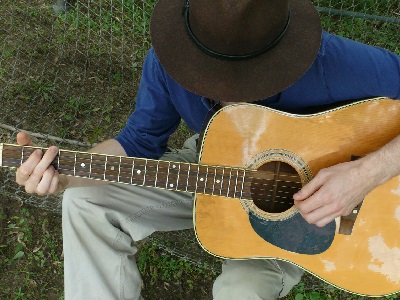 If you want to express your faith through music, one of the best ways is through learning the guitar. Not only can you learn to play all of your favorite worship songs, but you also won’t need a full band or a choir; you can by the voice and the instrumentation.

In this article, we will go over some of the most common worship chord progressions.

Before you get into the lesson, you should take a quick look at your skill set. While you don’t need any advanced musical knowledge, you will need to know the basics of music intervals, scale degrees, and triads.

If you are comfortable with your knowledge, then you can move on. If not, it may be best that you take some time to study up a bit before tackling these progressions. They aren’t hard, but it is best that you understand exactly what they are before diving in head first.

All of your examples we will in the key of C Major for Major, and A minor for minor. This is because these are the most basic keys in music, involving absolutely no accidentals (sharps or flats), which makes them the prime slate for learning.

Check The Most Common Progressions

Perhaps the most common progression used in worship guitar is the I, IV, I, V, or the tonic, subdominant, tonic, dominant progression. This progression, when used in C Major, would consist of the chords C, F, C, and G. Using the basic triads, we would come up with the notes C, E, G for our I chord, F, A, C for our IV chord, and G, B, D for our V chord.

Another great progression, which is very similar to our first, is the I, IV, V, I progression, or the tonic, subdominant, dominant, tonic progression. Another tonic based progression, when used in C Major, this progression consist of the chord C, F, G, and C. Our basic triads would be C, E, G for our I chord, F, A, C for our IV chord, and G, B, D for our V chord.

A common minor worship chord progression is the i, iv, i, V, or the tonic, subdominant, tonic, dominant. Note that the dominant in both a major and minor key is still a major scale degree. When played in A minor, we would get the chords A, D, A, and E. Our basic triads would be A, C, E for our i chord, D, F, A for our iv chord, and E, G, B for our V chord.

Changing Things Up With 2 Chords Progressions

A great change in pace from our four chord progressions is the i, V progression, or the tonic dominant. This is another minor progression, spanning only two chords, which makes it easy to play at a relaxed pace. The chords involved would be (in A minor) A and E. The basic triads would be A, C, E for our i chord and E, G, B for our V chord.

Our last worship guitar chord progression is the I, ii, iii, ii, or the tonic, supertonic, mediant, supertonic. Despite the looks, this is a major triad. Our chords (in C Major) would be C, D, E, and D. Our basic triads would be C, D, E four our I chord, D, F, A for our ii chord, and E, G, B for our iii chord.

Now that you know some worship guitar progressions, the next step is to go practice. Once familiar, try working them into different keys.